This typical German food involves wrapping thinly sliced meat ‚ usually beef but also veal or pork ‚ around a filling of bacon or pork belly, chopped onions, pickles and usually mustard, and then browned and simmered in broth (braised). The mixture changes between regions, with some variations including minced meat. It is common to serve this dish with gravy, dumplings, mashed potato or blaukraut (cooked red cabbage). This was once considered a common dish using cheap meats but is now eaten at festivals, weekends and family meals.

These soft egg noodles are Germany’s answer to pasta. Sptzle is especially popular in the south of Germany and considered a Swabian speciality and associated with the Baden-W¼rttember state, although the origin of this dish is disputed and variations are found in neighbouring countries. These noodles made from wheat flour and egg are often served topped with cheese (ksesptzle) ‚ rather like macaroni cheese ‚ and sometimes with roasted onions too. They are also used to accompany German meat dishes that use lots of sauce or gravy, such as Rouladen, or in stews, such as Gaisburger Marsch (a Swabian stew).

Rote‚ gr¼tze is a red fruit pudding that is a popular dessert in north Germany. It‚s made from black and red currants, raspberries and sometimes strawberries or cherries, which are cooked in their juice and thickened with a little cornstarch or cornflour. It‚s served with cream (sahne), milk or vanilla sauce or ice-cream.

A steaming bowl of eintopf will warm anyone on a cold day. The name of this traditional German stew literally means ‚one pot‚ and refers to the way of cooking rather than a specific recipe. However, most recipes contain the same basic ingredients: a broth, vegetables, potatoes or pulses and then some meat (commonly pork, beef or chicken) or sometimes fish. There are many‚ eintopf regional specialities, such as lumpen und fleeh (which means ‚rags and fleas‚) in the Kassel area, similar to Irish stew, or with lentils‚  (linseneintopf) typical in Th¼ringen.

Germans love their meat dishes, and sauerbraten (meaning ‚sour‚ or ‚pickled‚ roast) is a pot roast that‚s regarded as one of the country‚s national dishes. It can be made from many different meats, which are marinated in wine, vinegar, spices, herbs and seasoning for up to 10 days. This recipe is ideal for tenderising cheap meat cuts. Schweinenbraten is a delicious roast pork dish usually served with braised cabbage or sauerkraut and dumplings (knoedel), and washed down with a pilsner beer.

Kartoffelpuffer‚ are shallow pan-fried pancakes made from grated or ground potatoes mixed with flour, egg, onion and seasoning. You can enjoy them either salty as a side dish to a main course of meat or fish, or sweet with apple sauce, blueberries, sugar and cinnamon. Look out for them in outdoor markets in the winter.

German potato dumplings (Kartoffelknödel or Kartoffel‚ Klösse) are also a common staple in dishes, served either as a side or main dish, in soups or sweet. You may see dumplings on menus called Klösse (or Klö¸e, said ‘kla-sa’) in west and north Germany and Knödel (said ‘ka-na-del’) in south-east Germany, or sometimes filled with fruits or meats.

Brezel are soft, white pretzels made from flour water and yeast and sprinkled with salt (and sometimes different seeds). It’s great to eat as a side dish or snack, especially with a strong German beer. They‚re in every bakery and on street stands, sold plain, sliced and buttered (butterbrezel) or with slices of cold meats or cheese.

You‚ll find lots of cakes and tarts to tempt you in Germany, commonly made with fresh fruits. Few can resist a huge slice of the most famous of German cakes: the delicious Schwarzwalder Kirschtorte, or Black Forest cherry cake. The cake is named after Schwarzwalder Kirschwasser, which is a liqueur distilled from tart cherries. Alternating layers of rich chocolate cake, cherries and whipped cream are topped off with more cream, maraschino cherries and chocolate shavings.

A schnitzel is a thin, boneless cutlet of meat, which is coated in breadcrumbs and often served with a slice of lemon. You can choose a Wiener Schnitzel (Viennese schnitzel), which is made of veal, or a Schnitzel Wiener Art made of pork (Schwein). If you order a Hamburg-style schnitzel, it will arrive with a fried egg on top, while a Holsten-style schnitzel will come with an egg, anchovies and capers.

There are more than 1500 different types of Wurst (sausage) made in Germany and you‚ll find street stalls selling them everywhere. The most popular include Bratwurst (fried sausage) made of ground pork and spices, Wiener (Viennese), which is smoked and then boiled, and Blutwurst and Schwarzwurst, which are both blood sausages. Look out for regional specialities like Berlin‚s Currywurst (sausage with curried ketchup on the top), Bavaria‚s Weisswurst, a white sausage that you peel before eating with a sweet mustard, and Nuremberg’s grilled Rostbratwurst, served with fermented shredded cabbage (sauerkraut). In‚ Thuringian the local Th¼ringer Rostbratwurst has received protected geographical status and the recipe dates hundreds of years. It is characterised from other sausages by distinctive spices (such as marjoram and caraway).

One could argue that Gulasch is not really a German invention, but nevertheless the Germans love their Gulasch and may have taken the original recipes and turned them into som variations of their own. Gulasch is made with thick pieces of beef meat that have been slow cooked in a rich sauce, sometimes made of red wine, which makes the meat very soft and tender. Gulasch can be eaten as a soup or with some side dishes like Sptzle.

Of course another dish made of pork meat is Leberkse. Leberkse is usually rather served as a snack during the day rather than a real meal. Leberkse is more a kind of a sausage that is put in the oven for a long time, then sliced and served with white bread and sweet moustard. Very tasty but also very heavy and probably not the healthiest of all German foods. Rumour has it that back in the days some monks, who were not allowed to eat any meat during feasting, covered some meat in kind of a pasta dough so that God could not see that they are eating meat. No matter if that story is true or not, but believe us when we say that this Swabian dish is another fantastic thing‚ to try while in Germany. Maultaschen are either boiled or fried and come with all kinds of stuffing like pork, beef or even a veggie option. 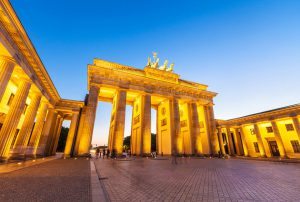 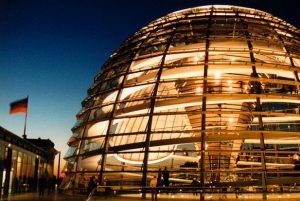 Berlin is full of surprises. With its ever-changing life, it's hard to keep up with even a…