The classic sweet snack is the Alfajor ‚ two round biscuits filled with copious amounts of dulce de leche. There are many variations, most commonly a chocolate coating, but I prefer the simple version. Foodie travel bloggersUncornered Market recommended the Cachafaz brand to us and we weren‚t disappointed.

Italy is always going to win the ice-cream first prize but Argentina does a good job of imitating their creamy gelato. The helado here is positively addictive and it doesn‚t help that there are so many flavours to try. Choose a cone or give in and get a half kilo tub. Our local haunt is Emede in Recoleta, but the best heladeria we found wasJauja which served many unusual and all-natural flavours.

The strong Italian influence continues with the many pizzerias found throughout the city. It‚s a vegetarian staple and a good option for a cheap meal. The pizza isn‚t quite like in Italy (or even New York) and we generally found the bases too thick and the toppings too heavy on the cheese, but it is possible to find some good pizza.

After‚ spending your time in Buenos Aires eating all of the above, believe us you‚ll be in need of a good salad. Unsurprisingly the vegetarian restaurants are the best places to go for inventive salads with quality ingredients ‚ Artemisia and‚ Bio are both good options.

The Argentines obviously have a sweet tooth, as there are panaderias (bakeries) on every street packed with impossible to resist pastries and cakes. Medialunas (sticky croissants) are a cheap choice for breakfast or as a late afternoon snack when you are waiting desperately for dinner ‚ they don‚t eat until 10pm here.

These popular Argentine savoury pastries are one of our favourite snacks here. Although meat fillings are most common it‚s easy to find queso & cebolla (cheese & onion) versions. Great for a quick and cheap meal.

Choripán is the people‚s sandwich. No major sporting or political event takes place without it, and no barbecue begins in its absence. It was the first Buenos Aires street food, before food trucks appeared on the scene. A combination of the words chorizo and pan (bread), choripán consists of chorizo sausage inside a French bread roll, made from either pure pork or a mixture with beef and spices. It‚s cooked on a parrilla (grill) and the fattiness melts, giving it a unique flavour. Add chimichurri sauce for a special twist. One of few authentically porte±o dishes, revuelto gramajo is a mix of fried potatoes, eggs and ham, made and eaten on the spot. There are various versions of how it came about ‚ the story goes that it was named after the obese, food-loving Colonel Artemio Gramajo, an aide to former Argentine President Julio Argentino Roca, before a battle in 1879. Others say it was the invention of the writer Flix Luna, author of Soy Roca, and another story goes that it was a dandy tradition from the 1930s. A traditional home recipe, matambre relleno (filled matambre) is a staple of every porte±o party menu. The basis of the dish is matambre, a thin cut of beef from between the skin and the ribs, like flank steak. Its name is a composite of two Spanish words: matar (to kill) and hambre (hunger), and it was a favourite of the gauchos, who ate it seared on the grill to satisfy their appetites. There are various ways to prepare it, but the classic version is filled, rolled and served as a cold entre with a Russian salad. Of all the homemade desserts, flan is never missing on the tables of sweet-toothed porte±os. Based on milk and eggs, the sweet dish arrived with the Spanish who gave it its name. Buenos Aires residents created their own version by adding whipped cream and their signature dulce de leche ‚ an inimitable caramel-like sauce that‚s been dubbed Argentina‚s ‘culinary and gastronomic cultural heritage’. 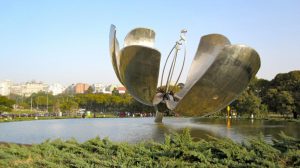