The lake appeared in the Tunisian desert like a mirage; one minute there was nothing but scorching sand, the next a large expanse of turquoise water.

For locals in the Tunisian desert, roasting in the 40 degree C heat, the temptation to cool off in the inviting water quickly overcame any fears about the mysterious pool.

Hundreds flocked to what quickly became known as the Lac de Gafsa or Gafsa beach to splash, paddle, dive, and fling themselves from rocks into the lake, ignoring warnings that the water could be contaminated with carcinogenic chemicals, riddled with disease or possibly radioactive. Even after the water turned a murky green, they arrived in droves, undeterred. 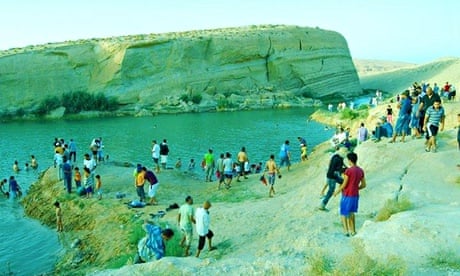 “In the first few days, the water was crystal clear; a turquoise blue. Now it’s green and full of algae, which means it’s not being replenished.”

Mehdi Bilel was returning from a marriage in the north of the country when he spotted the lake in the desert canyon 25 km from the city of Gafsa on the road from Om Larayes. After several long hours on the road without a break, I honestly thought I was hallucinating,” he told journalists. “I don’t know much about science and thought it was magic, something supernatural.”

Gafsa became the centre of the country’s mining industry after phosphate was discovered in the southern Tunisian region in 1886. Tunisia is now the world’s fifth largest exporter of phosphate, which is used in industry.

Shepherds discovered the lake, thought to be up to 18 meters deep and covering one hectare, three weeks ago. Local geologists suspect seismic activity may have ruptured the rock above the water table sending the liquid to the surface.

Other theories have suggested the canyon has simply collected rain water.

“News of the lake’s appearance has spread like wildfire and now hundreds of people, eager to escape a heatwave, go there to swim,” Souid wrote in the Tunisia Daily newspaper.

“This region is overflowing with large deposits of phosphate, which can leave behind radioactive residue so there is a real risk that the water is contaminated and carcinogenic. There’s no security of any kind.

“The site is certainly stunning and there are many large rocks perfect for diving, but it has become infested with green algae, meaning the water is stagnant and conducive to diseases.”

Ten days ago Hatef Ouigi, of Gafsa’s office of public safety, warned that the lake is dangerous and not fit for swimming in. He said this was a cautionary measure while scientists take samples and verify the water. “Depending on the results, we will take measures,” Ouigi said.

Since then, there has been no further official news, though experts have warned that if the lake has indeed formed because of a rupture in the water table, the cracks from which the water came could cause the water to flow the other way and drag swimmers to the bottom.

“There’s no security, no lifeguards and civil protection people only turned up in the first few days,” journalist Souid added.