1. Monument to the Discoveries in Lisbon, Portugal

The Monument to the Discoveries, Padro dos Descobrimentos, is quite a distinctive structure standing at a height of 52 m (170 ft), this concrete slab is shaped like the front of a ship. This represents ships which departed from the banks of the Tagus river during the Age of Discovery. The monument honors those who took part in these explorations. It consists of numerous statues of some of the important people of that time including Henry the Navigator who funded the explorations.

Henry the Navigator died in 1460 and the Monument to the Discoveries was dedicated in 1960 to commemorate the 500th anniversary of his death. The mosaic on the pavement was offered as a present by the government of the Republic of South Africa in 1960. The monument is today a popular tourist attraction with over a million visitors each year. There is an elevator which carries visitors to the top where you can get wonderful views of the Tagus river and the Belem neighborhood. You can also learn about the history of Lisbon while inside the monument. Mother Motherland is a 62 m (203 ft) high statue which stands on top of the building of the Museum of the Great Patriotic War in Kiev, the statue thus stands at a height of 102 m (335 ft) and weighs 530 tons. There are also several other Mother Motherland statues across the former Soviet Union countries including Russia. Like many, this statue was built to commemorate a military victory and specifically the Great Patriotic War of 1941-1945.

‚ The Mother Motherland statue was dedicated on May, 9 1981 and is now part of the Museum of the Great Patriotic War complex which occupies 20 hectares of land. The museum is a popular visitor attraction and has received over 21 million visitors since opening.

The Statue of Liberty is a colossal neoclassical sculpture on Liberty Island in New York Harbor, designed by Frdric Bartholdi and dedicated on October 28, 1886. The statue, a gift to the United States from the people of France, is of a robed female figure representing Libertas, the Roman goddess of freedom, who bears a torch and a tabula ansata (a tablet evoking the law) upon which is inscribed the date of the American Declaration of Independence. A broken chain lies at her feet. The statue has become an icon of freedom and of the United States. Bartholdi was inspired by French law professor and politician douard Ren de Laboulaye, who commented in 1865 that any monument raised to American independence would properly be a joint project of the French and American peoples. Due to the troubled political situation in France, work on the statue did not commence until the early 1870s.

4. Monument Of Great Pyramid of Cholula in Cholula, Mexico 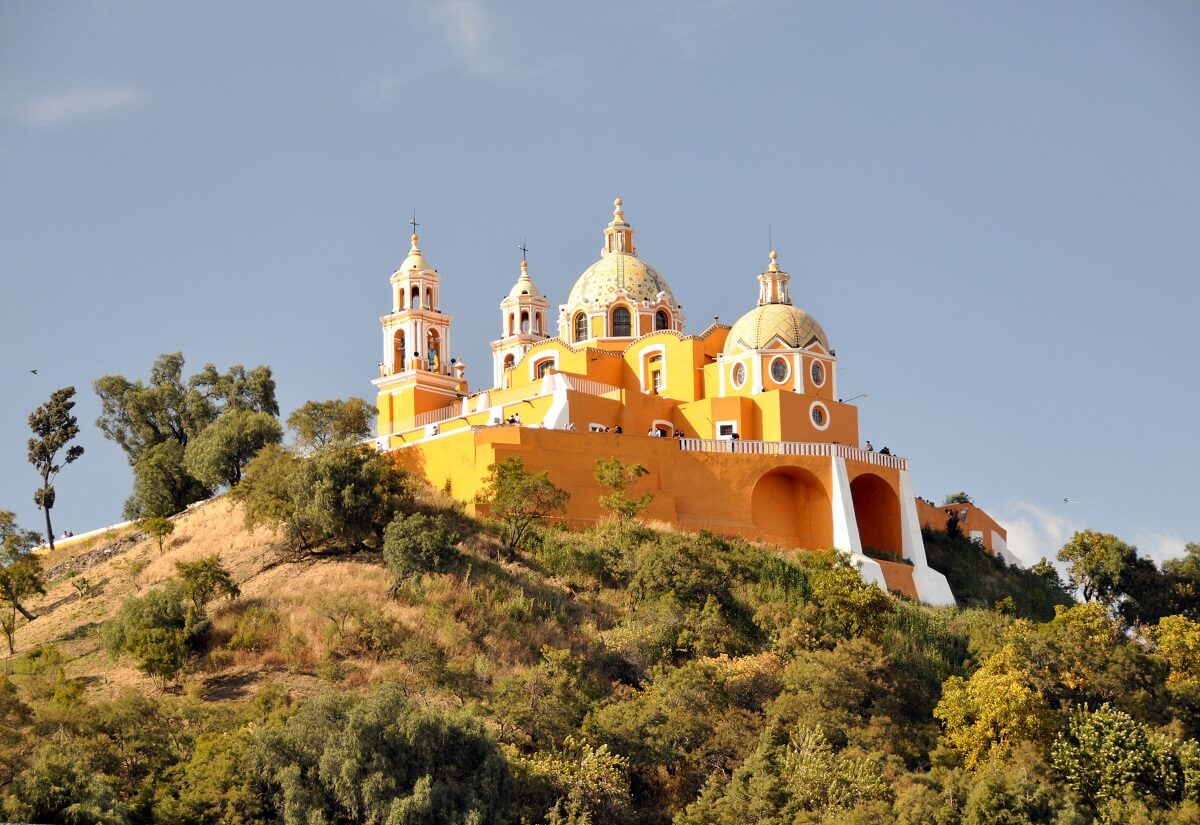 The Philopappos Monument was originally built around 114-116 A.D as a dedication to the Prince of the Kingdom of Commagene, Gaius Julius Antiochus Epiphanes Philopappos. He was entombed here after his death in 116. The Philopappos Monument is a 3 m (10 ft) high, two storey marble structure with a burial chamber where Philopappos is entombed. It is located on Mouseion Hill. It takes about 20 minutes to walk up the Mouseion Hill to the top, here you will experience fantastic views of Athens and the surrounding areas. This is one of the best spots to take photographs of the Acropolis nearby.Some parts of the Philopappos Monument have been destroyed, it is believed to have been fully intact as far as 1436 when it was mentioned by Cyriacus (or Cyriac) in one of his memoirs. 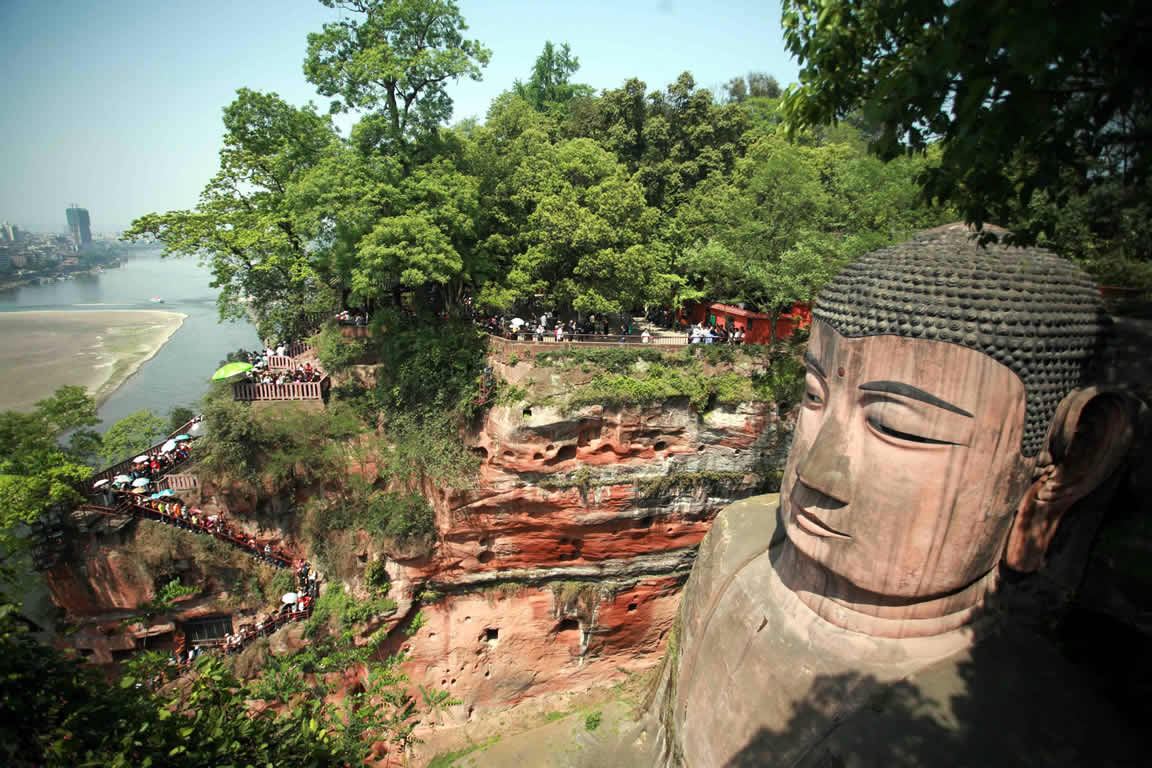 Leshan Giant Buddha is a 71 m (233 ft) statue of Buddha carved out of a cliff near the city of Leshan. It is the largest stone Buddha in the world. The statue depicts a seated Maitreya Buddha(or future Buddha) facing the intersection of the three rivers, Min River, Qingyi River, and Dadu River. It is seated with its hands resting on it knees, it also has 28 m (92 ft) wide shoulders and a 15 meter (49ft) high head. The statue was added on the UNESCO World Heritage Site list in 1996 together with the Mount Emei Scenic Area. Construction of the Leshan Giant Buddha was began in 713 AD during the Tang Dynasty, the project was initiated by a Chinese monk named Haithong. It was completed in 803 AD several years after his death. The statue also has a number of channels and pipes on its head, arms, behind ears and in the clothes. These serve as a drainage system which carries rain water out of the structure.

7. Statue of Christ the Redeemer in Rio de Janeiro, Brazil Christ the Redeemer (Portuguese: Cristo Redentor) is a statue of Jesus Christ in Rio de Janeiro, Brazil; considered the largest Art Deco statue in the world and the 5th largest statue of Jesus in the world. It is 39.6 metres (130 ft) tall, including its 9.5 metres (31 ft) pedestal, and 30 metres (98 ft) wide. It weighs 635 tonnes (625 long,700 short tons), and is located at the peak of the 700-metre (2,300 ft) Corcovado mountain in the Tijuca Forest National Park overlooking the city. A symbol of Brazilian Christianity, the statue has become an icon for Rio de Janeiro and Brazil. It is made of reinforced concrete and soapstone, and was constructed between 1922 and 1931.

Atomium is a 102-metres (335 ft) tall monument built for the 1958 World’s Fair. The structure represents the atomic lattice of iron crystals, magnified 165 billion times.The Atomium is one of the most visited attractions in Brussels today. The 1958 expo was met with enthusiasm since this was the first world exhibition to take place after World War II. Over 35 million people visited the Expo 58 and 46 countries from six continents were represented. 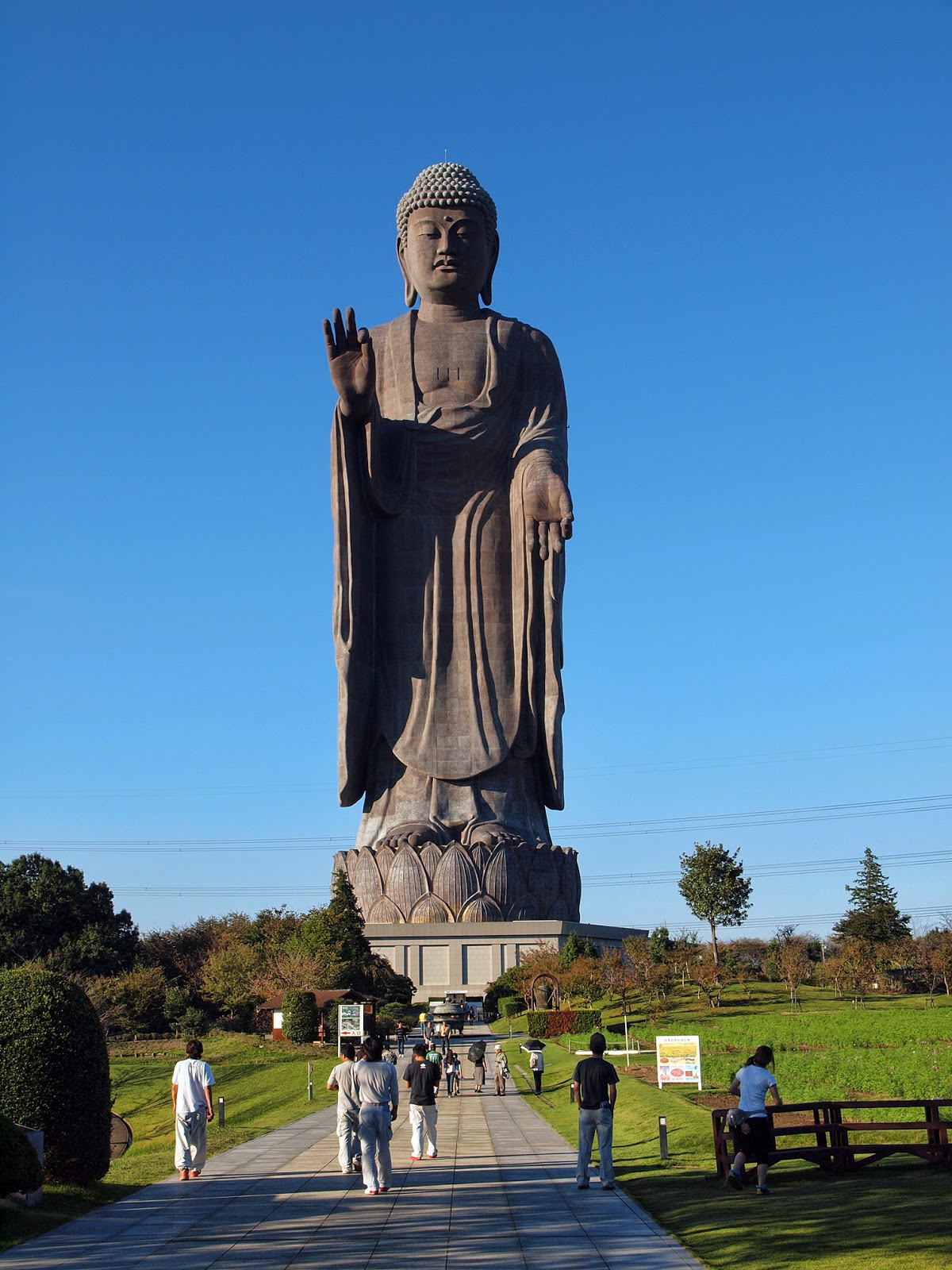 Ushiku Daibutsu is the tallest bronze statue in the world. The statue is 120 metres (394 ft) tall, this is more than twice the height of the Statue of Liberty in the United States. The base of the statue is 10 metres (32.8 ft ) high, the base is two stories high. Ushiku Daibutsu was completed in 1993, after ten years of construction. The statue consists of four floors which offer different experiences. The fourth floor, at about 85 metres (279 ft), has windows which offer views of the adjacent gardens.

Gol Gumbaz is one of the major attractions in the city of Bijapur. The monument consists of a large dome which measures 43.3 m (142 ft) in diameter, it is the second largest dome in the world by diameter. This dome stands at a height of 27.4 m (90 ft) and consists of 3 m (10 ft) thick walls. This mausoleum is famous for the whispering gallery whose acoustic walls cause a whisper or clap to be echoed about seven times. Gol Gumbaz was built in 1659 as a tomb for Mohammed Adil Shah, the ruler of Bijapur from 1626 to 1655. He was alive at the beginning of the tomb’s construction.

11. Pyramid of the Sun in Teotihuacan, Mexico 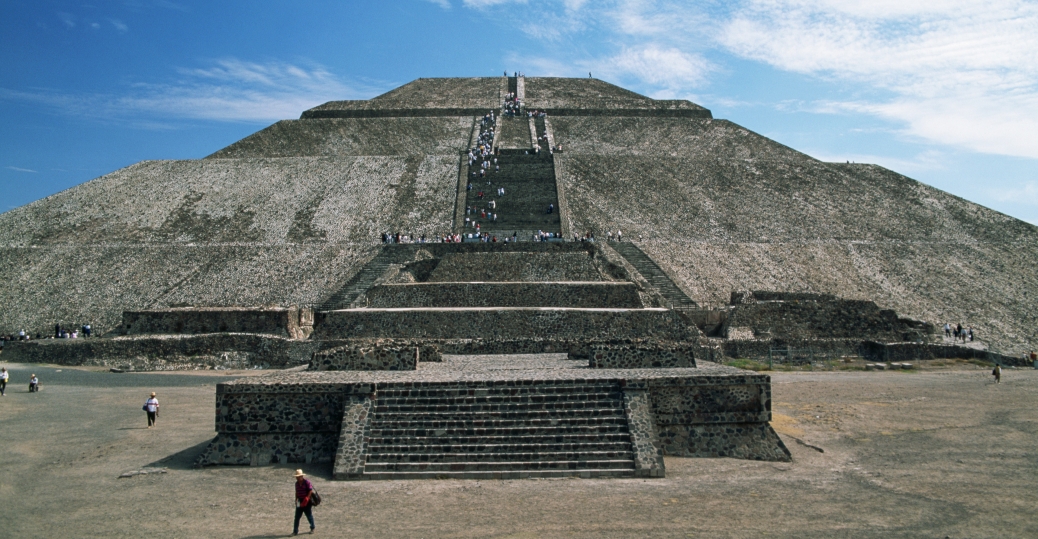 The Pyramid of the Sun is situated on the Teotihuacan archeological site in Mexico. This massive structure is the third largest pyramid in the world after the Great Pyramid of Cholula and the Great Pyramid of Giza. It was originally built around the first century in the Teotihuacan city, which had a population of about 100,000 – 150,000 and was one of the largest cities in the world. The pyramid originally stood at a height of 246 feet (75 meters), it has now been reduced to 233.5 feet / 71.2 meters. In the 1970s, a tunnel was accidentally discovered deep inside the pyramid. The tunnel leads to what might be called a cave which is a the center of the structure, it consists of four chambers and is shaped like a four-leafed clover. The cave was originally thought to have been naturally formed, it is now understood to have been man-made. It is not open to the public. The Pyramid of the Sun is one of the most popular tourist attractions in the region and is certainly worth a visit. There is a 248-step climb to the top which offers breathtaking views of the surroundings. 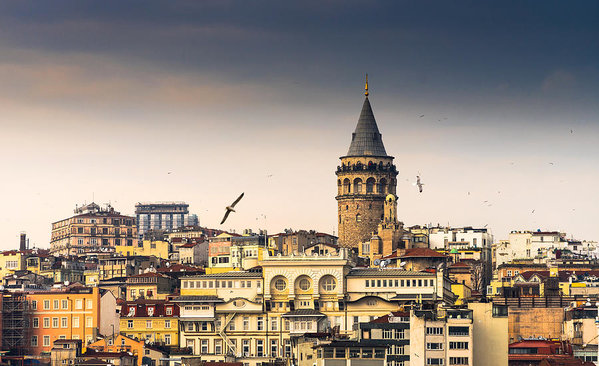 Galata Tower is a 66.9 metre (219 foot) stone tower in Istanbul, Turkey. The tower offers great panoramic views of the city and is a popular tourist attraction. It has a rich documented history which visitors can find on the inside, there is also a restaurant on top of the tower. The Galata Tower was built in 1348, it was the tallest structure in Istanbul at that time. It was part of fortifications built by the Republic of Genoa during its expansion. The tower was used for monitoring of ships in the Golden Horn. It continued its operation until 1794 when it was damaged by fire, it was also damaged by a storm years later. The Galata Tower was restored in the 1960s, the restaurant at the top was added during this time.