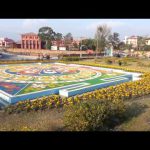 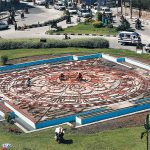 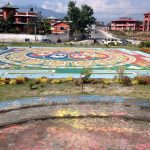 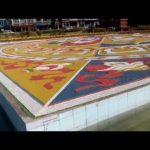 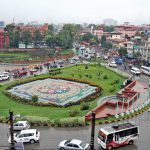 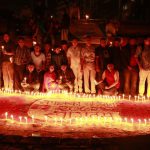 The Maitighar Mandala‚ is a symbolic monument located in the heart of Kathmandu, Nepal. It is an island at the intersection of roads from Thapathali, New Baneshwor, Bhadrakali and at the southeast corner of Singhadurbar, the administrative centre of Nepal. It forms an important landmark in the beautification of Kathmandu city and a master piece of art depicting Buddhist relics.It also marks the initiation mark stone of one of the major highways of Nepal, Araniko Highway that links Nepal with China.

The Mandala was built in 2001 for the 11th SAARC summit in Nepal to showcase Nepali culture after clearing many multistorying building.

The Mandala was designed to be in the form of a series of concentric circles. The outer-most has 32 vajras, the one next to it has 16 lotus petals and the inner has 32 garlands. Various colors on the Mandala (blue background; black, orange, and blue circles) symbolise man’s characteristics, too much of one would result in an imbalanced temperament. Black stands for ‚ (anger), orange for (love) and blue for ‚ (compassion). At the four corners of the mandala are symbols of the ashtamangal.

By 2010, however, the Mandala artwork fell into disrepair. In 2011, the Agriculture Development Bank, Nepal pledged to devote resources to restore the Mandala.‚ The Mandala got a facelift for the 18th SAARC summit‚ along with the overall enhancement of roads in Kathmandu.

During the Nepalese Civil War, peace advocates gathered at the Mandala to show solidarity for peace and against violence.