Aogashima is a small, tropical volcanic island in the Philippine Sea, under the administration of Tokyo in Japan despite being located some 358 kilometres away from the country’s capital. It is the southernmost and the most isolated inhabited island of the Izu archipelago. The island itself is a giant volcanic crater, and within that crater there’s another, smaller volcano. Aogashima is still considered an active Class-C volcano though it last erupted in the 1780’s. When last erupted it killed nearly half of the island’s population and forced the remaining inhabitants to flee. It took just fifty years for the people to return. Today, some 200 brave villagers live on the island. 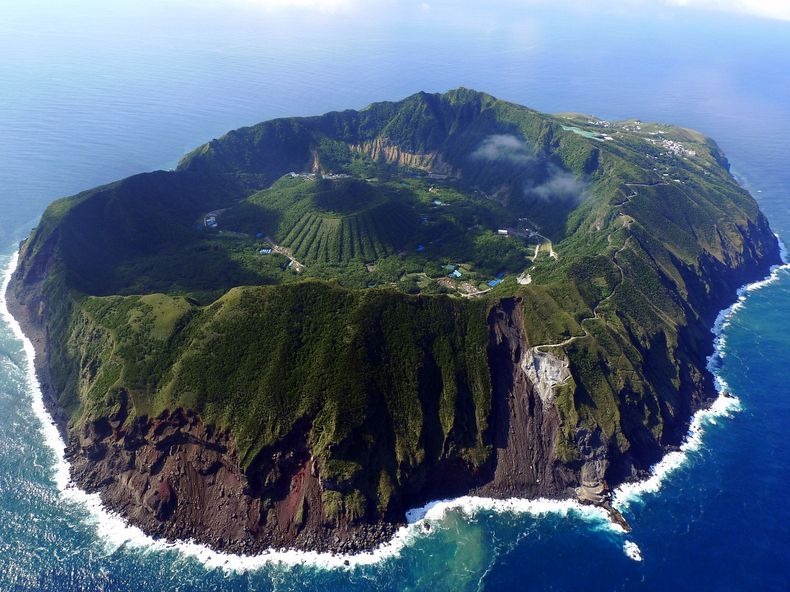 Aogashima is a submarine volcano that has emerged from the sea and is part of a large crater whose outer rim height ranges from 200 m to 420 m in height. It’s believed that the island was formed by the overlapping remnants of at least four submarine calderas. Aogashima consists of the rims of the inner and outer craters. The southern coast rises to a sharp ridge forming one edge of a caldera named Ikenosawa with a diameter of 1.5 km. The caldera is occupied by a secondary cone named Maruyama, which is still emitting geothermal steam around an area where no plants are evident. Otonbu, the peak of the rim of the outer crater at a height of 432 meters above sea level, is the highest spot in the island. It commands a panoramic view of the entire volcano in the Pacific Ocean.

Located in the Kuroshio region of open seas and known for tidal wave generation, the island is barely reachable except by boat. The island has no real harbour to anchor boats due to the steep rugged cliffs of layered volcanic deposits that surrounds the entire island. The other option is to take a helicopter provided by Tokyo Island Shuttle Service. Both of them depart from Hachijojima, with the nearest island some 60 km away. Before the helicopter service was launched in 1993, transportation of passengers, essential goods and food products used to be made by boat only, where people hardly knew when to expect arrival. The helicopter runs once a day and carries only a maximum of 9 passengers. Many times it gets cancelled due to heavy fog, depending on the season. This is why Aogashima in Japan is still a rarely-visited island.

There isn’t much to do on Aogashima though, except enjoy the serenity of a tropical paradise. In the center of the island lies a geothermal sauna. There is a public facility utilizing the geothermal power and gas and people use it to cook. This cooker using geothermal steam is available for free. Steamed fresh vegetables, potatoes or eggs are one of the specialties of Aogashima. The facility also features a sauna, a public bath, and hot showers. 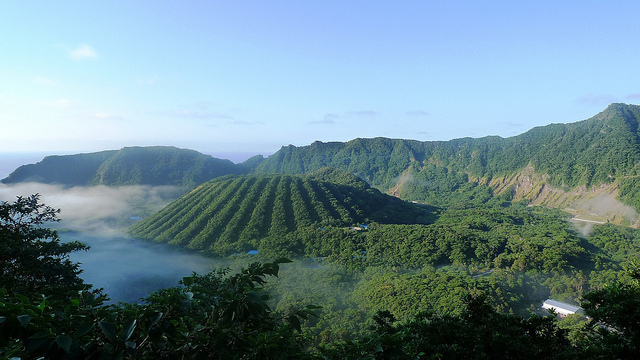 Aogashima is the smallest village in Japan. As of 2009, the island’s population was 205 and it’s decreasing. The island has a primary school with about 25 students. When they reach the age of fifteen, they would to go to high school on the mainland and nobody knows if and when they will be back to Aogashima. The folklore songs that people here sing are mostly about stories of leaving the island and parting with their loved ones.