The First Family will leave the White House in January, but their move will be a short one. The Obama’s will relocate just two miles from their current 1600 Pennsylvania Avenue address to the affluent neighbourhood of Kalorama in Washington, D.C. where they will rent a Tudor house, according to recent news reports. President Obama has said the family will stay in Washington, D.C., for a few years, at least until youngest daughter Sasha, 14, finishes high school.

The Obama’s Post Presidency house was built in 1928 and has nine bedrooms and eight and a half bathrooms. It was sold in 2014 for more than $5 million.

Obama has said he and his family will remain in Washington home after he departs 1600 Pennsylvania Avenue in January 2017, a change from most former presidents. 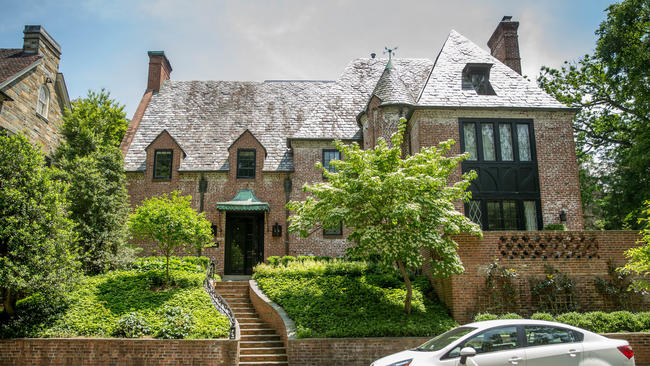 The Lockhart house is an 8,200-square-foot brick Tudor, and might cost $22,000 a month to rent, according to an estimate on the real estate website Zillow. It is currently valued at $7 million, according to D.C. tax assessments. It has a generous living room and dining room, a finished downstairs family room/media room, and an au-pair suite, which could be useful to the Obama family since First Lady Michelle Obama’s mother has been living with the family for years. When it was last listed for sale, it was described as meticulously renovated, with gracious living rooms, exquisite finishes, a stunning oversized terrace with formal gardens, and a courtyard with enough space for 8-10 vehicles.

It is located in the upscale embassy neighbourhood, next door to a former congressman and down the street from the French ambassador’s residence, and around the corner from the oldest house in the city. It is about two miles from the White House, and a half-mile from the D.C. home of Hillary and Bill Clinton.

Former presidents are allotted continuing protection by the Secret Service after they leave office, so the agency will need to design and implement a security plan to protect the house and its occupants.

They would need to make an assessment of the potential dangers around the house, and possibly make a number of changes, according to former Secret Service Assistant Director Anthony Chapa.

According to Chapa, alterations might include bulletproof windows and doors; reducing the underbrush across the street to provide clear lines of sight; more lighting outdoors; changes to parking rules in front of the house; and deploying electronics for monitoring the area.

“They’ll have agents assigned to the residence who are here all the time, maintaining security and addressing issues,” he said, and an agent would likely be posted full time at the door.