It is safe to say that Paris is the place on Earth with the highest density of top-quality, artisanal baguettes. Each year a competition is held to elect the ‘Meilleure Baguette de Paris’, and the list of best-baguette awardees is a good resource to select your provider. Don‚t forget to tear off the crusty, still-warm tip and nibble on it as you walk away, as any self-respecting Parisian does.

The epitome of the bistro dish, this simple pairing of a grilled steak with various optional sauces‚ and chips is elevated to serious heights when the meat is well selected and carefully matured, and the potatoes are fresh, hand-cut and double-fried.

Most brasseries and cafs in Paris offer non-stop service, and a staple of their menu is the croque-monsieur, an oozy and crisp grilled ham and cheese sandwich usually moistened by a touch of Bchamel sauce. If you‚re extra hungry, get the croque-madame, which adds a fried egg on top.

Originally devised to preserve fresh duck meat for future consumption, the confit method consists of‚ cooking duck thighs in their own fat, until the meat is spectacularly moist and fork-tender. Few Parisian bistros make their own, but they pride themselves in selecting the best producer, typically from the Southwest of France, and serve them seared until the skin turns golden and crisp. The classic side is pommes sarladaises, heavenly garlicky potatoes sauted in duck fat.

Like all city dwellers, Parisians often need to eat on the go, and the jambon-beurre is the most Parisian of sandwiches. You can buy it from corner bakeries or order it from the counter at most cafs; in both cases it will come as a fresh half-baguette, its insides smeared with cool butter and garnished with‚ ‘jambon de Paris’, a pink-hued cooked ham, with optional cornichons.

Paris is truly the gastronomic hub of France, and nowhere is it more apparent than in cheese shops, where you can buy the makings of a cheesy Tour de France and taste your way through each region‚s stars, from the mildest to the sharpest. Always favour raw-milk cheeses (unless you have a compromised immunity) and ask the vendor what‚s best right now, as the production of artisanal cheeses is a seasonal affair.

Walk past any bakery in the wee hours of the morning and you‚ll be instantly spellbound by the warm buttery smell of fresh croissants escaping from the air vents at pavement level. This is your cue to step in and get your golden prize, which you can tuck into and savour on your morning walk as the city awakens. Sadly, fewer and fewer French bakeries make their croissants from scratch ‚ they buy them frozen instead ‚ so it‚s worth asking to make sure your boulanger still engages in that noble, delicious craft.

Named after a long-established bicycle race that sees competitors cycle from Paris to the tip of Brittany, this is among the best-sellers in Parisian pastry shops. The wheel-shaped choux pastry shell‚ garnished with praline buttercream and sprinkled with caramelized almonds‚ is guaranteed bliss for sweet‚ lovers.

The delicate pastry, consisting of two almond meringue shells glued together with buttercream or ganache, has taken the world by storm but its birthplace is resolutely Paris. Available in all sorts of flavours and just as many colours, macarons are two-bite delights, but it is worth seeking them out from reputable pastry shops that actually make their own ‚ many just hop on the bandwagon and sell factory-made ones that aren‚t worth your time or dime ‚ and go easy on the rainbow-style food colourings.

Walking around Paris, you‚ll see street stands selling crªpes everywhere. One of the few truly native street foods, the crªpe is indeed a lovely treat to indulge in when it‚s time for an afternoon snack. Be sure to pick a stand that cooks crªpes to order (rather than reheat them from a pile cooked earlier), makes them thin (nothing worse than a gummy, undercooked crªpe) and is kept spotlessly clean. Though you may be tempted to try all kinds of stuffings, serious aficionados stick to the beurre-sucre (butter and sugar) for the true, unadulterated crªpe experience. 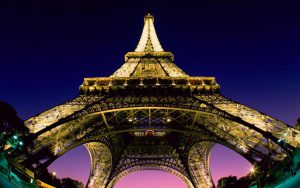 Paris is one of the most popular tourist destinations in the world, and there are some…