Although the number of sheep in New Zealand has dropped in recent years, there are still six sheep for every Kiwi in the country. It‚s hard to leave lamb off a list of Kiwi foods when you have those odds. I‚ve never been hugely into the taste of lamb, but if there was one country that convinced me to think otherwise, it was New Zealand.

Even though Kiwis like to say that their best lamb is generally exported, even the ‚lower‚ quality lamb you‚ll find in New Zealand is probably going to be much better than any you‚ll find at home.

There‚s an age-old debate between Kiwis and Aussies over where pavlova actually originated from, but since the Oxford English Dictionary has sided with New Zealand and the oldest recipe comes from there, I‚m including it on this list. Regardless of where this delightful sweet came from, there‚s no doubt that it‚s a big part of Kiwi food culture, especially for‚ those unique‚ occasions and holidays, such as Christmas.

Pavlova is a meringue-based dessert that is usually topped with an assortment of fruits, especially strawberries and kiwi fruit. It was named after the Russian ballerina, Anna Pavlova, who toured Australia and New Zealand in the 1920s.

Kiwi candy has it‚s own special category because of how varied and intriguing‚ it is. While I was in Australia there were a ton of candy brands I recognized, but when I first arrived in New Zealand there were hardly any names I knew besides Cadbury.

This was actually great because I could be a kid again and discover new candy I had never heard of nor tried previously. I soon realized how much they enjoy their fruit-flavored candies and chocolates. A few classics to try would have to include chocolate fish, pineapple lumps, Jaffas, Perky Nana, and a block of Cadbury Black Forest. Whittaker‚s chocolate is also one not to miss.

Following up the sweets trend (I promise that‚s not all there is for Kiwi Food), Hokey Pokey is the most popular ice cream in New Zealand. For the longest time I didn‚t even know what exactly was in Hokey Pokey since all of the Kiwis I asked didn‚t exactly know ‚ they would just say ‚it‚s Hokey Pokey!‚

It turns out those solid lumps in the vanilla ice cream are honeycomb toffee, and let me be the first to tell you how delicious they are. If you‚ love ice cream as much as the next‚ sane person, do yourself a favor when you arrive in the country and head to the local grocery for a tub of Tip Top Hokey Pokey. You can thank me later.

Green-lipped mussels are especially a favorite‚ in New Zealand because it‚s the only place in the world where you can find them. Even if you‚re not a fan of food that comes from the sea, it would be poor form not to‚ try a few of these mussels‚ when you‚re in the country.

These large and fatty mussels are‚ also known for their health benefits, especially with aiding in arthritis issues and their use as an anti-inflammatory.

A sausage sizzle is exactly what you would think it would be ‚ a barbecue with sausages. However, it‚s included on this list because a sausage sizzle is not just your average ballpark cookout. It‚s very much a part of the Maori and Kiwi culture as a whole in New Zealand. It‚s not unusual to see a sausage sizzle while walking down the street, either raising funds for a charity or just offering cheap barbecue fare.

Sausage sizzles are also a popular facet to Kiwi parties and get-togethers. Think of it as the Kiwi version of a tailgate party in some ways. Sausages tend to be served with a piece of white bread, tomato sauce, and caramelized onions for a deliciously quick and communal meal.

If you want to truly experience the local Maori culture, taking part in a hngi (‚hung-y‚) is a must. There are a few tourist attractions, especially out of Rotorua that offer a visit to a traditional Maori village and include a hngi meal. Although that‚s great if you‚re just in New Zealand for a short time, if you have a chance to experience an authentic hngi with Maori friends it‚s a much better way to go.

A hngi is possibly the best meal you‚ll taste in New Zealand. It‚s centered around a feast that is cooked for an extended amount of time underneath the ground. Think of a succulent dish where the meat falls off the bone and you‚ll have an idea of how tasty a proper hngi can be.

Originally from South America, a feijoa (‚pha-joe-a‚) is another item of food that the New Zealand culture has embraced fully. This fruit is similar to a guava and is popular in the autumn‚ in New Zealand. It‚s generally‚ in abundance at local grocery stores from March until June.

Around this time, you‚ll see feijoa flavors in everything from ice cream and smoothies to even craft beer. The fruit can best be described as a mix between pineapple, guava, and strawberry.

Paua is a shell used on jewellery and souvenirs in New Zealand, as well as being the dish Paua fritters.

New Zealand is one of the most gorgeous countries on earth, and even with its modest-sized,… 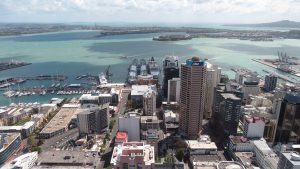 Regularly rated as one of the world’s most livable cities, Auckland—also called Tamaki…