Thailand‚s most famous dish ‚ a Bangkok street eat staple ‚ takes the form of rice noodles stir-fried with dried and/or fresh shrimp, bean sprouts, tofu, egg and seasonings, and is traditionally served with lime halves and a few stalks of Chinese chives and a sliced banana flower. Decades-old and perpetually packed Thip Samai is undoubtedly Bangkok‚s most lauded destination for the dish.

Lemongrass, kaffir lime leaf and lime juice give tom yam ‚ often insufficiently translated as ‚Thai sour soup‚ ‚ its characteristic tang; fresh chillies or an oily chilli paste provide it with its legendary sting. Tom yam is available just about everywhere in Bangkok, but it‚s hard to beat the version at Krua Apsorn, a legendary shophouse restaurant in the city‚s old district.

With likely origins in Bangkok‚s royal palace, mah hor are delicate yet full-flavoured Thai snacks that combine chunks of mandarin orange or pineapple and a sweet/savoury/peppery topping that unites pork, chicken, peanuts, sugar, peppercorns and coriander root. Although increasingly rare these days, they can be found as part of the set meal at nahm.

The old-school version of this tiny, taco-like snack is sold with two types of fillings: sweet, which combine rich strands of duck egg and preserved fruit, and savoury, which include a spicy mixture of dried shrimp and white pepper. Available from street vendors in older parts of Bangkok, such as the stall at Nang Loeng Market.

Crispy noodles prepared the traditional way, via a former palace recipe that provides the dish with a uniquely fragrant, sweet/sour flavour, are a dying breed. Longstanding shophouse restaurant Chote Chitr is one of a handful of places to try the old-school version of this dish.

Biryani or spiced rice, a dish found across the Muslim world, also has a foothold in Thailand. In Bangkok the dish is typically made with chicken and is served with a sweet-and-sour dipping sauce and a bowl of chicken broth. Try the charmingly old-school version of the dish at 70-year-old Bangkok institution, Muslim Restaurant.

These grilled skewers of meat, a staple in Southeast Asia‚s Muslim countries, probably came to Thailand via Malaysia or Indonesia. Today, the slightly sweet peanut-based dipping sauce that accompanies them is often mistakenly associated with Thai cooking outside of Thailand. Sate is available streetside or at open-air hawker gatherings such as the Soi 38 night Market.

Known as murtabak in Malaysia and Indonesia, these are thin sheets of dough that have been stuffed with a savoury (minced pork or beef seasoned with curry powder) or sweet (egg and slices of banana) filling and fried until crispy. Available at classic Bangkok-style shophouse restaurant, Roti-Mataba. 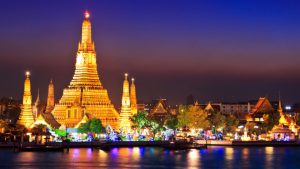 Bangkok is the country's only metropolis, the major port, the major receiver of foreign…