Pyroclastic surges are low density flows of pyroclastic material. The reason they are low density is because they lack a high concentration of particles and contain a lot of gases. These flows are very turbulent and fast. They over top high topographic features and are not confined to valleys. However, this type of flow usually does not travel as far as a pyroclastic flow. It can travel up to at least 10 kilometres from the source (Scott, 1989).

A pyroclastic surge, which can top out at 290 mph, with a high temperature of 1,830 dF. It is a fluidized mass of turbulent gas and rock fragments which is ejected during some volcanic eruptions. A base surge is usually formed when the volcano initially starts to erupt from the base of the eruption column as it collapses. It usually does not travel greater than 10 kilometres from its source. A ground surge usually forms at the base of a pyroclastic flow.

An ash cloud surge forms when the eruption column is neither buoying material upward by convection or collapsing. Such deposits can be formed before, after, and during, the formation of pyroclastic flows (Francis, 1989).

These surges are very hazardous. Such surges can bury, burn, and destroy things upon impact. These surges contain lots of gases that can asphyxiate people. Many people have been killed by pyroclastic surges. Probably the greatest number of people killed was in 1902 near Mount Pelee in the town of St. Pierre when 30,000 people lost their lives (Scott, 1989). 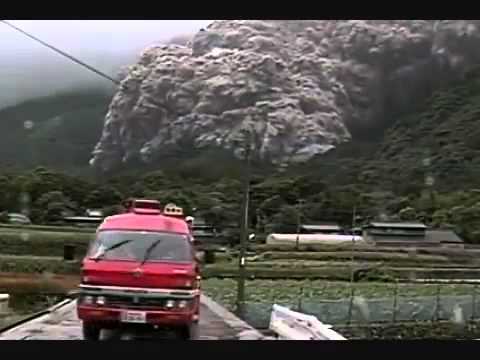