Fungi (pronounced fun-jee) is a kind of dumpling made from salted cornmeal mixed with water and shortening, and frequently, okra. It’s generally served as a side-dish with fish or meat dishes. Callaloo (or Kallaloo) is a soup or stew made from the leaves of the dasheen plant or some other green leafy plant such as taro leaves or spinach. It’s usually flavored with things like okra, salted meats, hot and black pepper, fish, onions, and spices. It might remind you (somewhat) of the gumbo served in Louisiana.

Johnnycake is a deep-fried bread or biscuit, sometimes made from unleavened dough. It’s sometimes baked rather than fried, and may be eaten hot or cold. Pates (pronounced patties) are pastries enclosing spiced meats, fish, and/or vegetables, then deep fried. They’re one of the most common foods of the Virgin Islands as a light snack.

Roti is somewhat similar to a Pate. Originating in India, it’s made with a light, fluffy dough wrapped around spiced or curried meats, chicken, or veggies.

Rice and Beans (sometimes called rice and peas) is a common traditional dish made from – you guessed it! – rice and beans. It’s generally flavored with herbs and spices, and is one of the most popular foods of the Virgin Islands among local people. Flavored rice by itself (without the beans) is also popular, usually as a side-dish

Conch (pronounced conk) is a large mollusk often served in chowder or as fritters (strips battered and deep-fried, usually served with a sweet, spicy sauce). Conch needs tenderizing, so when you order it, don’t be surprised if you hear pounding coming from the kitchen!

Salt Fish is dried, boneless, salted fish (usually cod) which is dense, firm, and meaty from the salting and drying. It can be served many different ways, including fried, in chowders, and in stew. 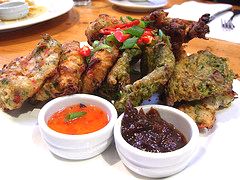 Curried Goat, Chicken, Oxtail, and Fish are all popular dishes. This is another preparation that has its roots in India.

Jerk is a kind of smokey, spicy barbecue treatment used on chicken, meats, and fish. It originated with the native Arawak tribe, and you’ll find it throughout the West Indies. 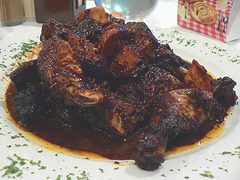