This cuisine gets many different names such as crayfish, crawfish, crawdads, “little dragon shrimp” or “little lobsters”. Although they use different words to express their love of this food, everyone knows that the citizens love their Xiao Long Xia. The idea of cracking the crayfish, sucking out the meat and licking the messy goodness off our fingers is way too enchanting. The small buns are served hot in the bamboo baskets in which they were steamed, usually on a bed of dried leaves. The buns are usually dipped in Chinkiang vinegar with ginger slivers. Unlike other stuffed buns, or Baozi, found throughout China, the fillings of Xiao Long Bao are traditionally broth and meat, while other fillings are also available. The broth wrapped as the filling is the essence of this food. When you bite a Xiao Long Bao, the broth inside will immediately flows out. The delicious taste will make you become a greediness person who only wants to eat more Xiao Long Bao. Tangyuan is a Shanghai local food, as a kind of traditional food in China. Tangyuan, sometimes called glutinous rice balls in English, is small balls made from glutinous rice flour. This traditional Chinese dessert is well loved by all generations. Put them into the water and cook them till they float on, then you can eaten this famous Chinese dessert. Tangyuan can either be filled with sweet or savory fillings, or unfilled.
Due to its round shape which is taken as a propitious symbol in Chinese culture, Tangyuan are always eaten to celebrate the reunion and harmony of a family. Besides eating these during the winter solstice, Tangyuan are also made on special celebrations (such as Chinese New Year and Chinese Lantern Festival) and used as an offering to the gods. Guotie is a kind of fried dumpling contains a juicy pork filling, much like Xiao Long Bao. The various tastes of Guotie, including pumpkins, black, fish, etc., make this food become a necessary food in Shanghaiese breakfast. Shengjian mantou is the complete name of this food. It is a type of small, pan-fried baozi which is a specialty of Shanghai. Stuffed like Xiao Long Bao with lightly spiced pork filling that sweats out a delicious juice during cooking, Shengjian Bao are fried in a large covered shallow pan (often alongside Guotie). 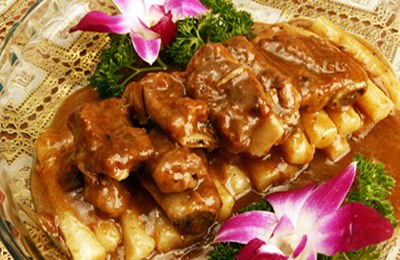 Pork ribs are coated with flour, five-spicy powders and eggs, soaked with soy sauce, sugar, cooking wine, chopped spring onion and ginger, then wrapped with New Year cake strips. Lastly, it is deep fried until the surface becoming golden brown. The New Year cake is made of glutinous Songjiang rice flour after pounding and kneading. It tastes tender, sticky and has high nutritional value. The two famous snack restaurants in Shanghai serving this specialty are called Xiaochangzhou and Xiandelai. 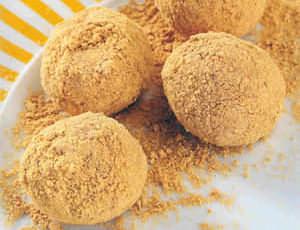 Leisha dumpling is one of the signature snacks of ShanghaiÃ¢â‚¬™s Qiaojiashan Restaurant with a history of over 70 years. It was said that in the late Qing Dynasty, an old lady surnamed Lei sold sweet dumplings with soup for a living. In order to sell more dumplings, she tried to find ways to keep the dumplings fresh longer and make them easier to carry. She tried to coat the dumplings with dry glutinous rice flour, and she discovered that red bean flour was the best choice. Therefore, the dumplings are called Leisha dumpling after her. 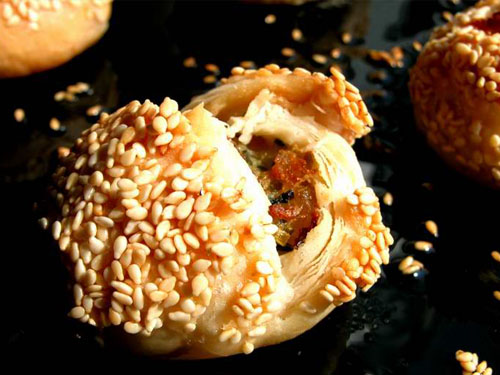 Crab shell cake is a kind of shortbread baked from ferment flour with oil, sesame seeds and salty or sweet fillings. The name comes from its color of brown yellow, which looks like a cooked crab shell. There are many options for the cakeÃ¢â‚¬™s fillings: spring onion, pork, crab meat, shrimp, sugar, rose pedals, bean paste and jujube paste. The cake is crispy with a sesame flavor. The crab shell cakes, along with the pan-fried buns stuffed with pork, was the most popular snacks in many most Shanghai tea houses over the years. 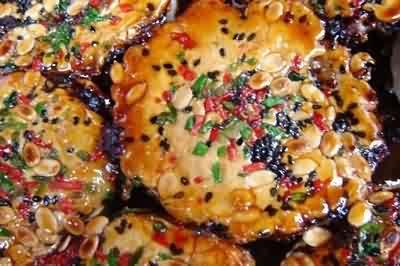 Ã‚Â Begonia cake is one of the snacks popular among the older generations in Shanghai. Bean paste is wrapped in flour dough and coated with slices of preserved fruits, sunflower seeds, sesame and barley sugar. The cake is baked in a mould shaped like a Begonia flower, giving the cake its name. It tastes sweet and soft and is best served hot. Because of its beautiful shape, it is as much of an enjoyment to eat the cake as it is to watch it cook.

People all over China like ShanghaiÃ¢â‚¬™s specialty cakes. Tiaotou cake, mint cake and double-filling cake are the most popular choices among a wide variety in Shanghai. Mint cakes are made of sticky rice flour mixed with mint, taste of which helps locals fend off the summer heat. The Tiaotou cake is made of rice flour mixed with bean paste, garnished with dried rose petals at the top. The cake is soft in the mouth and moderately sweet. Noodles are served with spring onion and fried shrimps. Locals say that eating a bowl of delicious noodles while having some other flavored snacks is a great way to enjoy life. 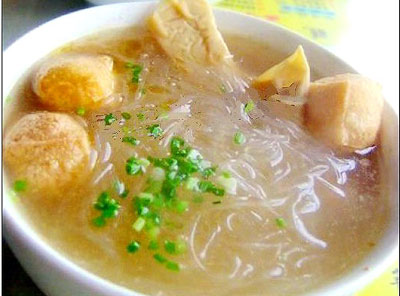 The soup is a traditional companion for most Shanghai snacks, fried tofu soup is one of the most commonplace. The soup has little salt or oil, and it perfectly matches the greasy snacks like pan-fried buns stuffed with pork. Fried tofu, bean starch noodles and minced pork wrapped in bean sheets cooked together in soup is a very popular combination among locals. 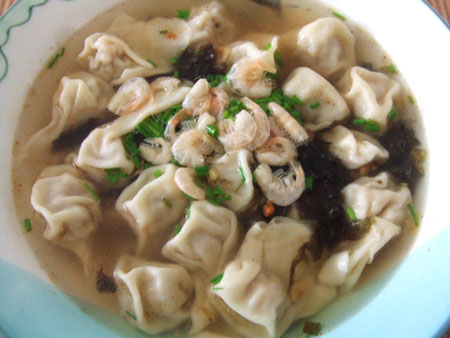 Different from the wonton soup in Wuxi, a city nearby, ShanghaiÃ¢â‚¬™s wonton is filled with freshly minced pork. Before serving, the wonton soup is added with three fresh delicacies Ã¢â‚¬â€œ egg pancake slices, dried small shrimps and dried laver.

The pan-fried bun stuffed with pork is a local Shanghai snack with a history of over a hundred years. The buns, made of fresh pork and pork jelly wrapped in half-risen flour dough, are fried in the saucepan. Cold water is added several times as the buns are fried while a lid is used to cover the saucepan to contain the steam. Chopped green onion and sesame is spread on the bun before they are fully cooked. 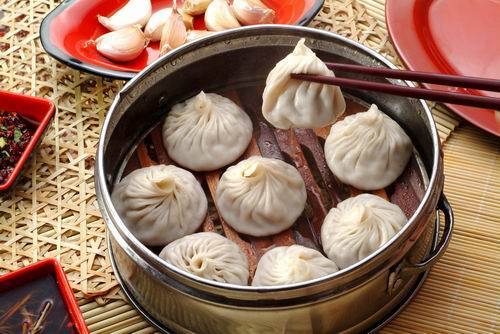 Nanxiang steamed bun has a history of over a hundred years. The bunÃ¢â‚¬™s skin is very thin, and its inside is filled with lean pork meat, pork jelly, ground sesame, bamboo shreds and shrimps. The bun is so carefully made that its skin is said to have at least 14 layers of folded bread, and the flour used for 10 buns weighs exactly 0.1kg. Looking half-transparent, small and delicate, the bun is juicy on each bite.